October 10, 2017
I've done a post of UK Rankings within the company in terms of actual ranking names and what you need to do to quality for the individual ranks. Having now been to P.I.T. STOP, I've learnt more about how the ranks actually work so I would share some simple knowledge.

As I mentioned in my last post, the most important thing to remember is to place your 300PV (equivalent to £600 before discount) order every single calendar month. The only way you can qualify for each individual rank is to place a 300PV order, otherwise it doesn't matter what your downlines do.

Rankings can only be reached if you have downlines. While you can make a successful income off your personal sales, having a team and sponsoring people is where the big money is. You rank reflects how successful you and your team are in that respect. Grow your first line as wide as possible and teach them how to succeed in this opportunity, so that they will go on to grow their first line, your second line. Big and wide means money and ranks! 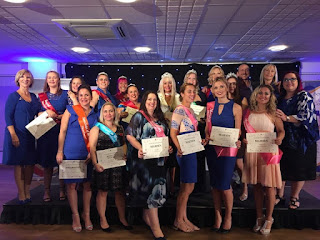 Even though I'm talking about money here, it shouldn't be your whole goal. Sure, it's nice to be able to make a career out of this and yes, I would love to be able to. The current record of any one team is over £4 million a month: crazy! But if you literally just focus on money the entire time, you're not going to be succeeding in this business. The goal should be happy, passionate and confident.

I found it really interesting in terms of how long ranks last. I was a little confused as to how long the rank last or if you lost the title monthly, if you didn't reach that goal. Well you do get to keep it, at least for a little bit. The qualifying year is April 1st to March 31st. Within that year, you keep whatever the latest rank you've earned is. So if you got it in and qualified in June, but not in July, you would still be known as the rank. Again, whatever rank you finish with on March 31st, you keep for the next qualifying year. If you don't re-qualify or improve during that year, you don't keep it at the start of the next qualifying year.

One thing to remember is that a Crown Princess never looses her title. We heard a story about someone who left the company a number of years ago. Despite that, she is still invited to training's and Leader's Conference where she would stand in the Royal Court as a Crown Princess, and be recognised as one with her crown as well.

Funnily, they have the equivalent title names but in the male version so if you were curious, look them up! Men can be recognised in this company too so don't be afraid to include them in the opportunity.

While ranks aren't everything, it's so exciting to be recognised for being a team leader and contributing to this business. I totally want to be a Princess and have a crown. But most importantly, I want to enjoy the experience and earn it.

I want to be apart of Senegence's goal to be a $5 billion USD company in 5 years. How amazing is it to be able to say that!?