March 05, 2018
The nail unit as a whole is composed of three main parts: the nail plate, nail bed and nail matrix. The nail plate is a hard keratin structure that protects the end of the finger. The condition and appearance of the nail plate is well recognised as being an indicator of the overall health. 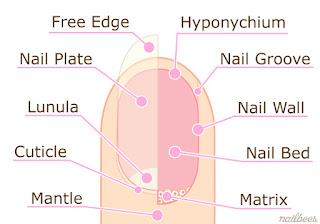 Nail cells are produced in the matrix (or nail root) and nourished from the underlying nail bed until the nail plate leaves the end of the finger. This “free” nail plate is the most challenged and exposed part of the nail unit. Unfortunately, it is also most often in the greatest need of cosmetic attention as it is prone to breakage and splitting.

The nail plate is comprised of flattened corneocyte cells and has three distinct layers. The dorsal (uppermost) layer is 2-3 cell layers thick and contains the oldest, most damaged cells. The intermediate layer makes up about 3/4 of the nail material and the ventral (lower) region is 1-2 cells thick and contains the youngest, softest cells.

The keratin nail plate is highly cross linked, containing approximately 10.5% cystine. This sulphur containing amino acid is responsible for holding the nail protein structure together and giving it the structural robustness it needs to perform its functions. This protein structure is porous and highly water absorbent. By increasing water content, the nail has an increased flexibility.

The nail plate also contains about 1% lipid, which is thought to reside between the corneocyte cells. When this is depleted, for example by solvents in nail polish removers, nail brittleness often results. The nail structure can be affected dehydration, solvents and detergents. It has been reported that repeated hydration and dehydration cycles cause a condition known as onychoschizia or lamellar dystrophy. This causes the nails to become dry, brittle and weak and to separate at the free edge.

This condition has been largely attributed to decreased nail plate moisturisation, possibly arising from a change in the protein structure and its ability to bind water or decreased water retention in the areas between the corneocytes where the lipids reside. It has been suggested that good condition (absence of lamellar dystrophy) can be achieved by hydration followed by the application of a topical agent which prevents water loss.